Have you ever wondered what allows some companies to dominate an industry while their competitors play ‘catch up’? What quality do great leaders like Mahatma Gandhi posses that allowed one man to lead a nation despite having no title or office? According to Simon, the question isn’t ‘what’, but ‘why’.

In this enlightening TED talk, Simon Sinek shares the founding philosophy behind his approach to leadership. Learn the simple question that all great leaders must ask themselves first before appealing to others for loyalty and support. 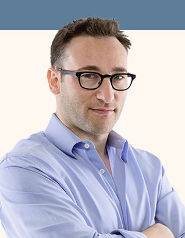 Simon Sinek is an optimist. He teaches leaders and organizations how to inspire people. From members of Congress to foreign ambassadors, from small businesses to corporations like Microsoft and 3M, from Hollywood to the Pentagon, he has presented his ideas about ‘The Power of Why.’ He has written two books, “Leaders Eat Last” and “Start With Why” and is quoted frequently by national publications. Sinek also regularly shares 140 characters of inspiration on Twitter (@simonsinek).